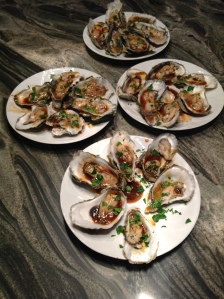 Oysters!!!! My hat comes off to the first desperate soul who cracked open that first  slimy, muddy bivalve to discover the salty, meaty delicacy we now enjoy on a regular basis.  A quick search on the worldwide web, dates the consumption of oysters to prehistoric times.  My consumption started when I was about 5 years old.  My father would place two chairs in the backyard under a shade tree. He’d plop me in one of them and position himself in the other with a basket of oysters (and sometimes clams) at his feet.  The shucking began and I waited patiently as he pried open the bivalve with a knife that looked like it was used by the prehistoric folks. Once opened, salty oyster liquor gushed from the mollusk as my father slid the knife under the meaty flesh inside the shell and released it from its cup.  As he handed me the bottom half with the oyster floating in the liquor, he tossed the top shell into a basket he reserved for the remains and proceeded to open the next one.  It took all of two seconds for me to slurp that salty piece of heaven from its shell; doing my best to savor every ounce of liquor surrounding the meat because I knew I’d need to wait at least another five seconds for my father to open and enjoy his oyster before preparing another for me.  Once we had our fill, the basket with the remains was carted off to the driveway or down to the creek where the shells were returned to their birthplace.  Such fond memories! Spending quality time with my father; learning to open an oyster; and feasting on our region’s bounty. Bless my father’s heart for introducing me to this amazing delicacy of the sea!   As my culinary skills developed, so did my love of oysters.  Finding new recipes to include the mollusk became a mission. I stumbled upon this one a while back while searching for some Asian dishes.  The addition of ginger intrigued me.  So, I gave it a try and oooooh….mmmmyyyyyy…..gooooooodness!  Unbelievably delicious! Click on “Continue reading…” for the recipe and photos. I hope you enjoy it as much as we do. 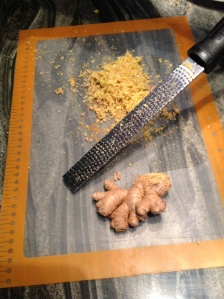 Ginger-Soy Butter
1.    In a small saucepan, combine the ginger and cilantro.  Add the sugar and the soy sauce. 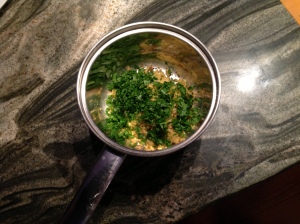 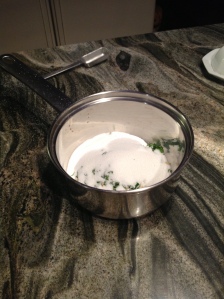 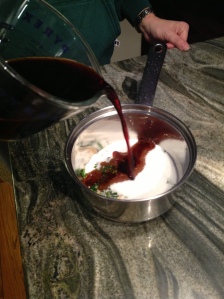 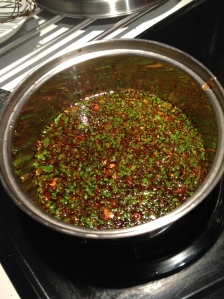 Sauce in the pan over medium heat

Place the saucepan over medium-high heat and simmer until liquid is reduced by half.

2.    Reduce the heat to low and slowly stir in the cold butter, piece by piece. 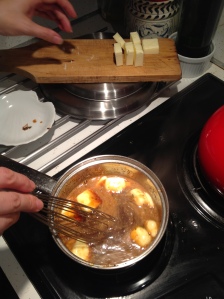 Strain the mixture using a sieve. 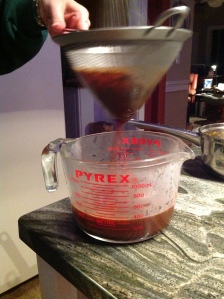 Get every last drop! 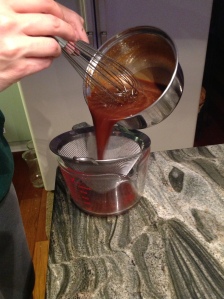 Discard the solids remaining in the sieve and keep liquid in a warm location.  This is your Ginger Soy Butter – and it’s going on the oysters in a minute!

1.    Place the oysters in a bamboo steamer; you will probably need to use both baskets.  NOTE: If you don’t have one of these, you can use a standard stock pot.  This steamer basket just gives you a good view of the oysters so you can remove them from the steamer the moment they begin to open.  If you can’t find one of these, leave us a comment and we will help you find one! 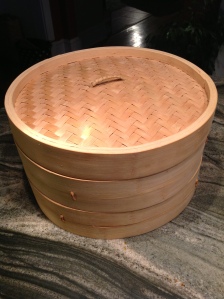 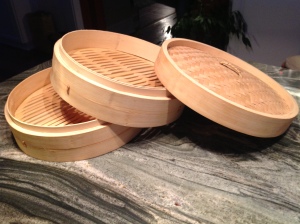 The Steamer in pieces 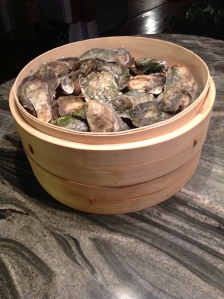 The Steamer Loaded and Stacked! 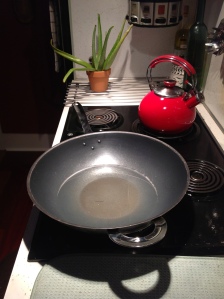 A little water in the pan… 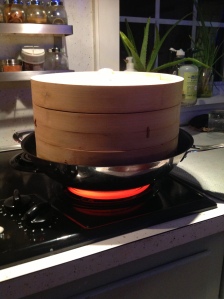 Place the bamboo steamer in the pan.

2.    Place the steamer over a pan or pot of boiling water (right), making sure the pan is wider than the bamboo basket and only has a half inch of water in it (left). I used a wok and it worked great!

3.    Steam the oysters for 4 minutes and check to see if they have started to open; if not, steam another minute or two.
4.    When the oysters begin to open, remove those that are opening, leaving the others in the steamer until they, too, start to open.  It does take some oysters a little longer to open. 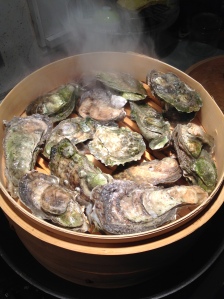 Marry these with a substantial salad and enjoy a fabulous oyster dinner! We paired a bottle of red Zinfandel, which turned out to be a splendid accompaniment! Let us know your comments and experiences preparing and eating this one!

About The Kitchen Island

Dedicated to the art of cooking simply and tastefully.
View all posts by The Kitchen Island →
This entry was posted in Dinner, Oysters, Seafood` and tagged Ginger-Soy Butter, Oyster, Soy sauce, Zinfandel. Bookmark the permalink.