Webster traveled extensively during his misspent youth (a period that ended a little more than 10 years ago, when he met me), and, aside from anything else he picked up, he certainly picked up some cooking skills.

On our first Valentine’s Day together, he invited me and The Bug over for “a special dinner”. Yes, that’s right, our first Valentine’s Day included my 14 year old daughter who was not too happy with Mom’s new love interest.  After assuring her that he would not be serving salmon, she graciously agreed to attend.  Webster advised that we come “dressed”. The Bug decided her 6th grade formal gown was the appropriate attire while I settled for a simple cocktail dress. He greeted us decked out in a tux, welcomed us in French and presented us both with a lovely arrangement of flowers. (The Bug started to warm up to him at this point.) He told us the story of how he learned to make this dish and his “friend”, Pierre Arnaud, whom he’d apparently last heard from five years earlier. We were to experience mussels á la Pierre.

At this point, I must relinquish the keyboard to Webster.  For you see, he, and only he, can paint the scene of that European adventure that led to the magnificent culinary delight we enjoy every Valentine’s Day.  Take it away, Honey….

Those of you who have spent more than a few hours in any continental village or hamlet along the English Channel or the North Sea probably know the many pleasures of moules (mussels in French). They are served (in numerous iterations) and highly regarded from St-Malo to Den Helder. Being a mussels man myself, if they are on the menu board, I avail myself of them with a frequency second only to that with which I order salmon.

In the Spring of 1998, I had been wondering around France for a few weeks, ostensibly touring battlements of the Second World War and marveling, on a daily basis, at the lunacy of French bureaucracy when, after a long day breaking speed limits from Ouistreham to Trouville-sur-Mer, I found myself in Honfleur, a modest town at the mouth of the Seine, across from Le Harve. It was a mild evening so, after finding an agreeable room at the inn, I walked to the village center for dinner.

It was quiet; tourists were at least six weeks away. Given my experiences over the past several weeks, I had begun to suspect that it might be illegal to serve dinner before 7:00 PM in France and I, as had been my wont, had shown up early. Again. But the weather was fine and I found myself a small corner table on the empty patio of a tiny bistro overlooking the Vieux Bassin, an excellent vantage point for updating my travel journal and watching the comings and goings of the local hoi polloi.

After a few minutes, a short, chubby monsieur ambles up to tell me that I’m early (what’s new?) but he would be happy to bring an aperitif. At the time, I was favoring Campari and orange juice and one promptly appeared. However, instead of heading back into the restaurant, Monsieur Chubby wants to chat.

It turns out he owns the joint(!) – as well as the restaurant behind this one and they are connected by the kitchen! What efficiency, I thought! And in France of all places! Though there was no one else in this particular restaurant, he claimed to be quite busy. (Everyone must have been in the other one.) However, I saw no staff, no chefs, no barmen, no anybody! But off he went, hustling back into the restaurant to “take care of business”. In five minutes, he’s back. “Have you decided, monsieur?” “Je prendrai les moules, s’il vous plaît et une bouteille de Ste Estephe.” “Excellent choix, monsieur. I will return.”

In another 15 minutes, my new friend was back with a bowl of mussels the size of a small Renault, a crusty baguette the length and heft of a 34 oz Louisville Slugger and a bottle of superb wine. I was about to settle in for the evening’s feast when, to my utter astonishment, Monsieur Chubby sat down across from me! He wanted to chat, indeed!

He introduces himself as Pierre Arnaud, propriétaire extraordinaire and, as he proceeded to tell me about his business, his woes, his illnesses and his disdain for authority, I considered his appearance: early 30s, about 5’4″ and weighing in at a svelte 240. His eyes were crossed, his shoes were mismatched and he wore last night’s red sauce on his shirtfront. A splendid example of late-90s French masculinity. But I was brought out of my reverie by a surprising phase: “Come back after 11.00. We’ll go get some girls.”

A number of thoughts and scenarios collided with one another in my mind, an event that I’m sure was audible. I coughed to cover this faux pas and asked him to repeat what he had just said, as my French was, at that point, at the conversational level only. “Let’s go get some girls later”, he repeats, unmistakably. Hummmm…..

I’m at least 15 years Pierre’s senior. Now, this was not necessarily a detrimental aspect as it suggested that whatever talent he had in mind was likely to be significantly younger than I. However, a second look at Pierre suggested that whatever talent he had in mind was either on a similar level of fashionable refinement or I was to be the bait (“Mes chers, come meet my friend, the American businessman! We will have some good time tonight, non?“) Fearing for the safety of my wallet in the second case and of my self-respect in the first, I demurred but took his business card “…in case you change your mind, mon ami“, he says. (The card was printed on both sides; one restaurant’s name and address on each. The name of whichever restaurant he was in at the time he handed out a card faced up.)

As it happened, the mussels and wine were so good that I returned two nights later for more. I was not surprised to find Pierre, finely turned out in the exact shirt with the exact stain, welcoming me again. But we were now amis and he suggested the same après dîner diversions. This time, he had a couple of actual customers other than I and so his attention was sporadic. I enjoyed a glass of port and a cheese assortment for dessert and decamped for a stroll along the quai, admiring the architecture, never to encounter Pierre Arnaud again. Or so I thought…

About a year later, temporarily back in the US, in the lead-up to a small dinner I was planning, I am discussing with friends this wonderful mussels dish that I’d had in Honfleur and wondering if I could conjure the ingredients and process to replicate what was a fabulous meal. I suddenly remembered that I’d taken Pierre’s business card. In a sure sign that God loves French cooking, I found it in my travel gear. It had a fax number.

Two days later, my fax machine begins to hum and there, of all things, is a response from Monsieur Pierre Arnaud, on letterhead, no less! With great anticipation I reach for the thermal sheet as it is cut from the machine and discover that, instead of him being happy to hear from his “ami Americain“, he is castigating me in two languages about the effrontery that I’ve displayed in asking a chef of such stature as his for the recipe of a specialty of the house. Three paragraphs in, the tone begins to soften and he segues into a modest reminiscence about our meals together. He seemed to recall that we, as comrades in arms, went on what he claimed to be a highly successful talent hunt one night among the quai-side dives. By the time he got to paragraph six, he was longing for my return, promising to visit me in New York and how could he possibly deny a recipe request from such an old and cherished friend?!?

That fax is around here somewhere – Wanda claims to have seen it – and that dinner party so many years ago became an annual event during which I serve a meal with a cholesterol count that likely exceeds the legal limit where we live. (None of the attendees is a cardiologist.) But that first Valentine’s Day with the lovely Wanda – and the Bug, who would, not long after, become my daughter – was the first time I prepared it for anyone other than that small group’s annual meeting. We’ve now replicated the event, tux, flowers and all, every Valentine’s Day since. Herewith, the recipe – with great appreciation and affection pour mon ami, Pierre Arnaud.

• One shallot (larger is better than smaller)

• One pint of heavy cream

• A baguette (for soaking up all that fabulous sauce!)

Webster, expansive and expressive, as is his wont

Chop the shallots. Melt the butter in a large pot.

Slicing and dicing. Chop that shallot! 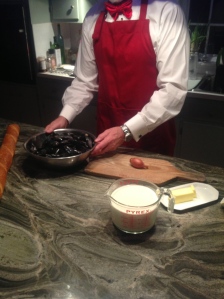 Once the butter is melted, add the shallots and stir.

Ready for the mussels!

Don’t get any on your tux!

Choose your wine and beckon for le garçon. Make sure he opens it properly! 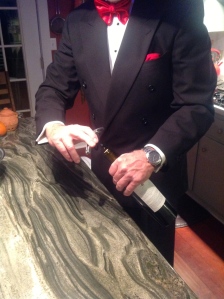 Cut up the baguette – so that you can soak up that amazing sauce – and serve!

Mais, sacrebleu, mes étudiants! Don’t forget dessert! In keeping with l’atmosphère française of the evening, I wanted to replicate a component of many of the meals from my times in France and the Benelux countries, and prepared un assortiment des fromages – brie, double Gloucester with stilton, porter-infused, Appenzeller, robiola – and a couple of chocolate truffles that I served with some port.

This finishing flourish is exactly what we had as the curtain came down on the meal of our first date, more than 10 years ago! It seemed extremely appropriate to combine this customary French dessert with the memory of that first evening together. We’ve shared this meal every year on Valentine’s Day since – though I admit to having a little more trouble getting into my tux this year.

This is a delicious dish and takes me back to France every time I make it. Enjoy it with someone you’d like to travel with and tell us how the dinner goes. Be sure to let us know what wine you choose.

Until then, bon appetit, mes amis!

About The Kitchen Island

Dedicated to the art of cooking simply and tastefully.
View all posts by The Kitchen Island →
This entry was posted in Dinner, Mussels, Seafood`, Travel, Uncategorized and tagged France, moules, mussels, travel. Bookmark the permalink.

Leave a Reply to The Kitchen Island Cancel reply